The Line at the Shake Shack 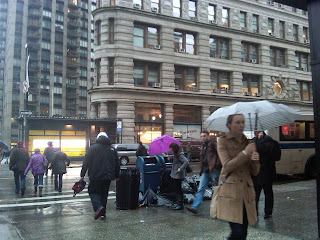 I just learned that Danny Meyer is opening yet another Shake Shack, this one in the Fulton Mall in Brooklyn. These uppity-duppity hamburger joints are now ubiquitous, and it bugs me that one of them stands in Madison Square Park. I don't care that this was the original Shack. Now that it's a chain, its design and logo are no longer distinct.(Frankly I never thought its design worthy of Madison Square to begin with). I say the Shack's presence cheapens the park. To say nothing of all the space it hogs, what with all those lines of people waiting for an hour to eat one of those hamburgers. Why should a chain restaurant be allowed to profit from this unique public space at the foot of the Flatiron? Would the public tolerate the sight of a McDonald's Golden Arch there? Somehow I don't think so.
Posted by Alice at 4:48 PM No comments:

I'm working now with filmmaker Charles Hobson on a documentary based on my book. He's done a lot of interesting stuff; check out his website: www.vanguarddocumentaries.com. I've never worked in film before. It's just another way of telling a story. Instead of written words, there are images. Gazillons of them. I'm blown away by how much work goes into producing just a few minutes of film.

Our photographer spent an entire day down at the Flatiron, shooting it and the streets around it from different angles. Each shot is a different point of view, and the hook for a new story.

One of the first moving pictures ever made consisted of montages of the just-finished Flatiron Building. It was shot in the fall of 1903. And now here we are, 107 years later, making another movie, starring the Flatiron.
Posted by Alice at 10:20 PM No comments:

Sunday, Nov. 7 at the foot of the Flatiron Building 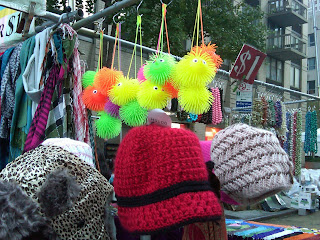 A Writer In the City

The one-graf bio on my book jacket states that I live on Long Island. But no more. This past summer my husband and I, after 26 years in the 'burbs, moved back to the city, to the Upper West Side, where my grandparents, then parents lived, and where I was born, and where Nick and I first met, more than 35 years ago, and where our first son, Alex, was born. I wrote my first book, a bio of the great urban thinker Jane Jacobs, and then THE FLATIRON in my house in the suburbs, in isolation, and it felt all wrong to be stuck out there, writing about the city. All the while, I was longing to be living where my narratives were taking place. New York is my home, and I'm finally home again. Now I wake up every day and buy my newspaper from the little Yemeni-owned store down the block and my fruit from the Bengali guy on the corner who's there 24-hours-a-day in the summer (yes, I'm indulging myself here with a play on Jane Jacobs' famous "sidewalk ballet" in THE DEATH AND LIFE OF GREAT AMERICAN CITIES.) When I turn onto Broadway, I look over the used books for sale on the tables lining the sidewalk. I admire the buildings along West End Avenue--I live just steps from the Ansonia, Henry Hardenbergh's gorgeous Beaux-Arts extravaganza. I subway around, often debarking at the 23rd Street station for no particular reason, and walking towards the Flatiron Building. Guess I'm not finished with it yet, even though the book's written. The Flatiron pulls me in, like pins towards a magnet. I don't try to resist its pull. That's how it is with stories: you just follow them, before you know what they are. When it's time to put them into words, you'll know.
Posted by Alice at 8:32 PM No comments:

Billy Dell, one of the foremen on the Flatiron job in 1902

Today I was back at the Flatiron Building, where I always seem to end up, across the street at Eisenberg's Sandwich Shop. There I met with the great-grandson of Billy Dell, one of the foremen at the Flatiron construction site in 1902. When Thomas Farawell came across his great-grandfather's name while reading my book, he contacted me. Whenever my father and I walked past the Flatiron, Thomas told me today, he'd say, "Your great-grandfather built this!" Billy "Bull" Dell came to New York from Chicago with his pal Sam Parks, the violent and corrupt leader of the Ironworkers Union, whom George Fuller paid handsomely to keep his rank-and-file from striking at Fuller Company construction sites.

Thomas brought along a photo to show me: his great-grandfather seated with eight other men, all dressed in sharply pressed suits and high collars. Looks to have been taken sometime in the 1890s. Next to Dell sits Sam Parks. Thomas is desperate to know more about Bull Dell, who, Thomas said, started out as a union organizer working with Parks, who went about construction sites, "inviting" men to join the Ironworkers Union. Dell eventually had his own contracting company in the tony Trinity Building and a beautiful home on the best block in Jersey City, where all the politicians had their houses. So where, Thomas wonders, did Bull Dell get all that money? Mmmmmm...My parents, Thomas said, never talked about their grandfather's business. Although there were vague stories of Bull Dell keeping guns in his house, along with the beautiful silver and other objects that only rich people had.

What an interesting addendum to the story of the Flatiron, a reminder that stories beget more stories.
Posted by Alice at 7:55 PM No comments:

Back in New York 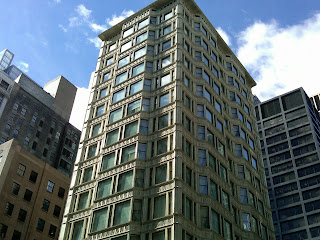 I miss Chicago! We don't sufficiently appreciate this city. (New York, I'm talkin' to you.) When I walked around the Loop the other day, admiring those early skycrapers built by Daniel Burnham and, yes, George Fuller--pictured here is the Reliance Building, now the Burnham Hotel--I felt so strongly Chicago's connection to the Flatiron Building.


This is what I told my audience at the Chicago Architecture Foundation the other day when I gave my book talk. I thanked them for the Flatiron Building, Chicago's gift to New York.

After my talk, a man asked me if anybody was building a mosque at the Flatiron Building. Quite a question, no?
Posted by Alice at 6:16 PM No comments: